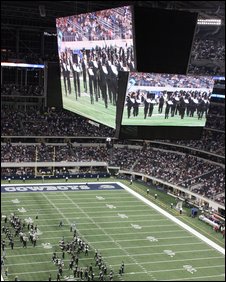 The giant four-sided screen has a surface area of 1058 sq m (11,400 sq ft) and hangs above the Dallas Cowboys' football stadium in the US.
Its manufacturer, Mitsubishi Electric, says the video board is the size of 3,268 52 inch TV sets, and contains over 10m Light Emitting Didoes (LEDs).
It consists of four panels, which together weigh 600 tonnes (600,000kg).
"This is probably the most exciting project we've ever been involved with," said Mark Foster of Mitsubishi Electric.