LG has confirmed that it will be producing a 3D enabled television, with the LD360 set to be available to consumers from April 2010.
LG believes that 3D is going to be a key trend for the coming decade, and its LD360 will provide consumers with a 47-inch LCD TV that will be compatible with such services as the Sky 3D TV channel. That means the television will have the passive 3D tech, which means consumers will need glasses to view 3D, although LG insists that ‘Consumers only need simple, affordable 3D glasses to enjoy their favourite 3D movies, programming and videogames on the LD360.’
“One of the biggest trends in TV in the coming years is certainly set to be 3D and LG is making its first 3D TV (LD360) available to consumers in April 2010", said LG. “This 47-inch LCD TV gives viewers a more dramatic, immersive experience and will change the way families enjoy the home entertainment experience". “The LD360 will be compatible with Sky 3D TV services which means that when Sky’s new 3D channel launches in 2010, families will be able to watch movies, entertainment and sport with the exciting extra dimension.”
Visit www.3dtvinfo.org.uk for all the latest 3D TV Developments.
Posted by LED Tele at 04:25 62 comments: 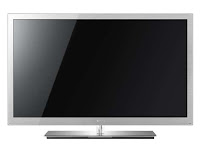 Samsung has launched a much-anticipated slew of 3D-ready TV offerings at CES.
The flagship LED 9000 series is just 0.3-inches thin, literally as thin as a pencil, with sleek brush metal frame and the ability to convert 2D content to 3D in real time, just like Toshiba’s Cell. The LED TV 8000 and 7000 series also boast 3D support out of the box. Excitingly the touch-screen 9000 remote can display live TV feeds while your main panel shows a Blu-ray, for example. In addition, when you move near the TV, it automatically opens up the button control panel for you. The old-school LCD-driven versions – 750 Series – also support 3D technology.
Entertainment enthusiasts can also enjoy 3D content on their Blu-ray player for the first time with the launch of the BD-C6900 as well as a 3D Blu-ray home theatre system which Samsung are calling the ultimate complete 3D home eco system that aims to deliver the “complete cinema quality 3D experience at home.”
The range will be compatible with Sky’s 3D TV service, set to launch later this year.
You’ll still need to put on a pair of specs to enjoy the full 3D experience which Samsung will also supply.

Visit www.3dtvinfo.org.uk for all the latest 3D TV Developments.
Posted by LED Tele at 04:23 1 comment: